Imagine you wake up tomorrow to go to work or school or Two Guys and you realize you can no longer drive your car there.

It’s not that your car is in the shop or stolen or you’re only 11 years old and couldn’t legally drive anyway. This is the life Jamey faces every day–he’s stuck, helpless, completely reliant upon me to leave the house.

Now you may be thinking to yourselves, “It’s not so bad. Plenty of older people have their licenses taken away and they can still get around. How else would the one Atlantic City casino still in business survive if it weren’t for old people?”

My grandmother never had a license, yet she was always out and about.

She relied on her friend Marge Cockleman. There’s an infamous story about Marge, a Lincoln Town Car and an impromptu game of “tombstone dominoes”, but good ‘ol Marge might be following the blog and I don’t want to embarrass her, so I’ll keep that story to myself.

Even if you don’t have a Marge Cockleman to ride shotgun with, as a non-driving older folk, there are Senior Citizen shuttles that can shuffle one to and fro.

Jamey doesn’t qualify for any of that.

I admit that I probably “allowed” him to drive for a lot longer than he should have and for mostly selfish reasons.

It’s simply easier to have 2 cars and 2 licensed drivers in the house, especially when you throw an active kid into the picture.

When people began to notice that Jamey was declining, I was often asked two questions:

That last “question” was almost always worded that way.

Very few people asked, “Is he still able to drive?” or “Is he still driving?”—there always seemed to be this subtle undertone of “Holy crap!!!!

Are you seriously letting this frothing-at-the-mouth mad man on the road to potentially kill himself or worse, a family of unsuspecting guinea hens!?!?”

I usually became bristly when asked that question and would follow-up with a defensive, “Well, there are several different types of memory–his muscle/procedural memory is still intact. Jamey, brain damaged, is still a better driver than I am.”

While this was true, I also knew that muscle memory wasn’t all that was needed to drive a car.

I also knew that the reason I became bristly and defensive was because, deep down, I understood that although no legal entity had told Jamey he couldn’t drive, he really shouldn’t drive anymore.

I knew Jamey would never voluntarily surrender his license, so I would have to be making that decision for him.
I’m not a very direct person when it comes to making decisions.

It’s not that I’m indecisive(wait, or am I?) It’s more that I think too much and, as a result, can usually posit a few valid arguments to support the same topic.

To bypass my broad-spectrum thinking, I often defer to others when they ask for my advice. I take the Socratic(see also “cop out”) method to advice-giving: “The truth is in you. Do what you feel makes sense.”

I believe that personal freedom is a fundamental human right. So you can imagine how hard it was for me to rob Jamey of that human right–his right to choose–his right for freedom–his right to drive.

Jamey and I complemented each other very well. We made an effortless team. We also balanced each other out well.

He was the foundation, the stable tether to my stray Thanksgiving Day balloon. I was the electrical current, he was my insulating sheathe.

I was the Peter Gabriel of Genesis, he was the Phil Collins. 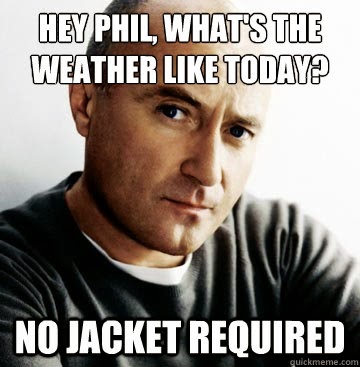 Sure, duos devolve into solos all the time. But, unlike in math, adding two solos together does not equal a duo.

The day I voluntarily surrendered his license to the DMV, we changed from duo to solo.

It was the first time we were no longer working as complementary partners.

And it scared the hell out of me–without my grounding tether, would I simply float away? Without my insulated sheathe, would I soon start short-circuiting?

And we all know how badly Genesis sucked with Phil Collins at the helm.

But it wasn’t so much the lack of partnership that bothered me. It was the addition of the conservatorship.

I went from being partner and spouse to keeper and parent.

I was making decisions for the man who’d always been the grown-up in our relationship. Now I was the only grown-up in the house.

That was(and continues to be) a very scary thought. If there are silver linings, however, Jamey still often believes he drives and will tell stories about trips he’s recently taken.

He’ll offer to drive to WaWa to get me coffee or offer to go food shopping.

Luckily, we finally sold our other car, so there’s no car for him to accidentally drive.

He did, however, almost take a test drive the other day. I was running late one morning after it had snowed overnight. He was already awake, so I asked him to clean the snow off my car. He obliged, and headed outside(in shorts, no gloves and slip on shoes). I watched him from my bedroom window as I changed for work.

I watched him start to slide snow off the windshield with his gloveless hands.

Then I watched him open the driver’s side car door. I assumed he was turning on the wipers/defroster, but walked downstairs(in my tights and turtleneck) just in case he actually tried to do more than that.

I watched as he turned the car around in the driveway(aww…isn’t that nice–so I won’t have to back out).

I watched as he pulled the car forward to the front walk(aww…isn’t that nice–so I won’t have to walk down an un-shoveled path) then I watched as he kept driving…and driving.

Then I bolted out the door, in just tights and turtleneck.

Luckily, the rush hour traffic is really heavy on our street, so I caught him before he hit the road.

I banged on the still-completely-snow covered window and screamed at him to “Stop!”

I then very politely and calmly told him that I really appreciated his offer to help, but that I would finish the car on my own. Ok, so I might not have been too calm or polite about it. T

he reality is that he’s an unlicensed driver pulling out into heavy traffic with a car that is almost completely snow covered.

When I asked him what he was doing, he said, “I was going to go to WaWa to get you some coffee. I figured by the time I go home, all the snow would’ve blown off the car. I was killing two birds with one stone.”

Yeah–and we’d have been lucky if all he did kill was those poor birds, or guinea hens, as it were.