……”a man and a woman had a little baby (yes, they did)…there were three in the family…three is the magic number…..”

There are likely many of you who knew right away that the above song was from Schoolhouse Rock.

Others may have thought that the Flaming Lips wrote this song.

So I was at the gym today and I was in a Sinead O’Connor music mood(see also raging, gritty, tearful and fragile all rolled into one).

I started off my run with “Gloomy Sunday”(and yes, I know that it’s not a Sinead original)

It then dawned on me that today was Sunday and that I was, in fact, feeling slightly gloomy.

The memory of Jamey’s death seems as misty and distant as it does smothering and acrid.

When someone significant dies, you aren’t just dealing with the loss of them(which is hard enough).

It’s like the lyrics from the song “Landslide”(yes, I know it was originally a Fleetwood Mac song)

I’m not implying that my life choices were entirely Jamey-dependent, but in a way, they were.

I mean, doesn’t that happen when you marry someone?

or an Encore frozen meal for dinner tonight?) or the distant future(should I wait until I’m 75 to take a

cooking class  so I can spend the next 30 years being lazy and microwaving dinners?

As banal or complex the questions, in a marriage(or, at least in our marriage), the answers are often

Jamey and I decided to buy our 150+ year old house with the intention of (eventually) restoring it,

Jamey and I had identities as “old home renovators”. 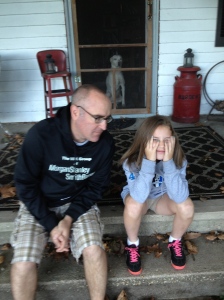 Waiting for the schoolbus

Jamey initially wanted more children than one. And we tried for a while, but things didn’t work out for us.

When he was diagnosed in 2008, we made the decision to not have any more kids.

Jamey and I had identities of “parent of an only child.”

Now that he’s gone, I’m questioning what my identities are anymore.

I chose to be a wife. I had an identity as a wife.

Although my “wifeness” may not have been especially Donna Reid 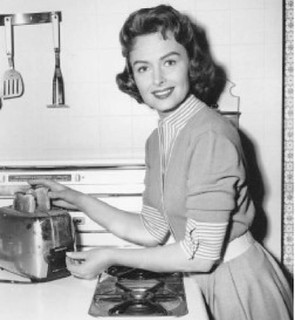 my wifeness worked for Jamey and me.

Now, I’m a widow….and I can’t think of the word without thinking of this song:

I’m pretty sure Eleanor was a spinster and not a widow, but I digress.

Aside from the tax benefits and being afforded a slew of legal rights, being married has some under-

My cousin, Sean, got married yesterday. Yeah–I kind of suck and forgot to mail back my “regrets” card.

Congrats to Mr and Mrs. Sean and Karen Biddulph!

It wasn’t until I look at the invite that I

realized, “Crud—if I go to the wedding, I’d have to find a date.”  When you’re married, your wedding date

is a lock. When you’re me, your only potential date is your 11 year old daughter.

wifeness on some poor unsuspecting fool.

But now that I can (legally, religiously and ethically) date, it makes me realize: “Holy crap, dating stinks!”

So for now, I’m trying to wear in this new “widow” identity without getting too many blisters.

As for the “old home renovator”—yeah, this one is kind of tough.  Jamey was fearless(in a good/bad way)

when it came to DIY projects. He also had really good taste and an architect’s eye.

I have none of that. I was the (un)hired help on all our home reno projects–I did the grunt work.

I’m now stuck with a 150+ year old home, a desire to DIY as much as possible to

honor Jamey’s memory and adoration for this house but very little skill and even less confidence.

So for now, my identity is as an old home owner and maybe future DIYer?

And then there’s the kid situation. TMI, I know, but I still do have the ability to reproduce

eggs down years ago).

I imagine that my ovulating expiration date is soon approaching and, with its imminent arrival, I feel a weird

urge to introduce another human specimen into the world.

If nothing else, I need a control subject to see how much of Caeley’s insanity is nature and how much

Maybe I feel the need to be needed again with Jamey gone?

Perhaps I’m longing for some purpose?

Is it possible I’m just experiencing some modified form of “empty nest syndrome?”

So for now, my identity is still a  the mom to an only child, but who knows?

There is always a chance, however, that I could address all of my identity crises

in one fell swoop.

Carrick(the son, not the dad), oh—and to make things easy he should be Catholic and, while we’re at it, he

should also be at least partly Irish…..and if his zodiac sign were a Scorpio, that would be great—-OH!

and his last name has to start with one of the following letters:

So if any of you HOTties knows someone who fits ALL the above qualifications, please reply below.

As you can see, I’m not picky at all.