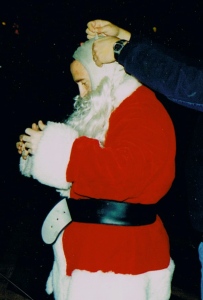 Santa Claus or Santa Cranstoun? You be the judge.

You know that feeling you had as a kid as you stared at the assortment of wrapped, ribboned and bowed boxes under the tree come Christmas;  as you surveyed the stacked birthday packages on a checkered tablecloth picnic table: the tiny lightning bolts of excitement haphazardly crashing into one another in your belly and flitting around your fingertips? Remember that? Yeah, me neither. There’s something to be said for jaw-dropping wonder, electrified excitement and genuine innocence. Perhaps we lose that awe as adults because we become habituated to it. Perhaps it’s decades of disappointing big reveals(like how you were really hoping for an “Esprit” or a “Benneton” sweatshirt from one of the cool kid stores and what you wound up getting was a “Champion” sweatshirt from Caldor.) Somehow, aging fades away that new car smell of hope and wonder. Our memories and experiences layer themselves on the banalities of life and we gain a different, albeit boring perspective. Bills and raking leaves replace bows and ribbons. We wonder why we bought the fabric checkered table cloth instead of a spill proof plastic one. Wouldn’t it be wonderful to go back in time–to a time before our storied disappointments–to a time when our only world, our only perspective was on the “now”–to a world frozen in the moment just before opening those gifts? Wouldn’t it be wonderful to click “delete” and rid ourselves of our faults and failures and the fact that we had 80s hair? Well folks, for only $19.99 (plus shipping & handling), I can make all of the above happen. In fact, I can give you several ways you can permanently park your hovercraft in the present–significant brain damage. Now, there are several ways you can get this brain damage. An anaplastic astrocytoma is one way(fancy talk for brain tumor)–that’s Jamey’s route to living in the now. You could also jump on board the Alzheimers train–that’s my mom’s route. Oh, I haven’t mentioned my mom at all, have I? Yep-about a month before Jamey started to rapidly decline, my mom was diagnosed with early-onset Alzheimers. I think she was 62 at the time. So when I say that a lot of people close to me are losing their minds, I’m not using hyperbole.
There is something to be said for being ever-present. In fact, in many forms of therapy, it’s a desired state of mind. The past is gone, the future is uncertain so one should focus on the only thing in life you can count on which is this very moment. That’s what Jamey’s, and to a lesser extent, my mom’s lives are like now. Sounds awesome, right? Total zen. And I guess you could argue that it is an ideal state of mind to enter. But there’s a difference between us and them–a BIG difference.  We(those will relatively “normal” brains) can consciously enter into that zen state. But, when we want we can also consciously bearcrawl out of that zen den. As jarring and heart wrenching and majestic as our pasts may have been, we can consciously choose to either dwell on them or delete the scenes. It’s up to us, because it’s a part of us. Our memories are as much who we our as our tongues, toes and trapezoids. Memories may not be physical entities, but if I were to hack them out of your brain, you would lose as much of a piece of you  as you would if I hacksawed off your tongue. Ok, now I’m beginning to go off on some manic existential tangent and you all are probably starting to feel like one of my students when they ask the question, “But isn’t psychology really just common sense” and I ramble on endlessly, Defender of my Discipline!
So this has all been a lead off to throw out a disclaimer to anyone who feels saddened or unnerved or irritated by my treatment of Jamey in any video I post on this site. I’d like you to keep what I mentioned in mind when you watch it and draw your own conclusions about the simple and complex implications. I do want you to understand this, however. Jamey, unlike my mom(currently, at least) knows no real past. At least no past that involves me and Caeley as a cast of characters. Sure, he knows who we are and knows our relationships to one another, but tender moments, tragic moments, terrible moments of our little family’s lives no longer exist in his memory. Much like Alzheimers patients, however, he does still remember long ago…to when he was a child and his mom was still alive(she also had cancer and fought very long and hard,but ultimately passed when she was 50 and Jamey was 15.) So while you may look at him in his videos and feel bad for laughing at his lack or recall or just feel sad or dirty or wrong for peering in on a man’s sad decline, rest assured he is not aware that he is declining. He’s also not aware that he’s dying. To him, in the present, in “the now”, he’s alive. He knows he’s alive, therefore he’s alive. There’s no angst or fretting for what’s to become of him because it simply doesn’t exist. There’s no sadness or pining for the past, because that’s not real either. For him, every day, every hour–heck every few minutes is like waiting for that stack of Christmas gifts. And Santa’s always a couple of chimneys away.