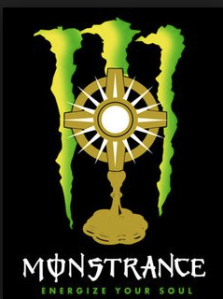 This monstrance mashup is a monstrosity!

Ok. Imma keep it real up in here. Jamey’s intake was Monday, January 19th. We met 3 out of the 4 Fantastics on that day. We met the 4th of the Fab4, Pastor/Chaplain/Reverend(whatever you call a priest who’s not a priest and can marry women and stuff—I’ll mash them all together and call it “PaChaRev”) Chuck on Friday, January 23rd. But just for continuity’s sake, I’ll talk about him here. To be honest, I was a little hesitant about setting up a meeting with P-Chuck. First off, when you’re raised Catholic like Jamey and I were and you hear the words hospice and religious person in the same sentence, your mind automatically goes to one of my favorite phrases from religion class: extreme unction (but I wouldn’t toss the word monstrance out of bed either.) For all of you out there who aren’t the hardcore awesome Catholic that I am, I’ll enlighten you godam*ed cath-slackers. Extreme unction is another name for the last sacrament–aka anointing of the sick–aka last rites–aka get ready for your dirt nap, dude. I really didn’t know what a religious man who wasn’ t a catholic could offer us. Not that a Catholic priest would have some monopoly on miracles or something, but at least we’d be able to relate to a priest. I just feel odd when I see a religious man wearing khakis. Although Caeley had been an active part of Monday’s intake documenting the event through photographs, I think the hospice novelty had worn off by Friday. Combine that with the fact that a priest-like creature was visiting us(she’d attended catholic school through the 3rd grade. Suffice it to say, she prefers public school because she can wear nail polish in public school-not that she ever does wear it–but) she had no interest sitting in on this meeting. She stated that she was not sitting in on the meeting “at all” to listen to “some random religious talk about God and stuff.” When Chuck knocked on the door, the dogs slowly lifted their heads, said “Whatevs….I’m SO over this!”, then went back to checking Instagram on their iPhone 5s(there is NO WAY  I would buy my dogs and iPhone 6!!) Let me preface the meeting with this: Chuck is a nice guy, he really is. I’m going to guess he has a background in some form of pastoral counseling. He’s a very “hands on” type PaChaRev–and by hands on, I mean he likes to put his hands on people. Not in the way some of his celibate Catholic ilk have done with altar boys and such, mind you; he’s just a guy who likes to be “connected.” Jamey, on the other hand, isn’t. I remember the first time we slept in the same bed which(since we’re both good Catholics and my dad is probably reading this)was, of course, our wedding night. Jamey said to me, “Do you mind if we don’t really touch each other in bed? You can have your side and Ill have mine? Also, do you mind if we both have our same blankets so as to not come into contact with each other. Furthermore, do you mind if we hang a sheet between us and cut a hole in it………” At this point, I cut him off. Neither one of us is a physical person. When my parents dropped me off at my first day of college, I shook their hands as they walked out of my dorm room. So yeah, not the “touchy-feely” type. I won’t go into much of what Chuck discussed because most of it was aimed towards Jamey and almost all of it was lost on him as well. I will, however, go into “The Touching.” The Touching” started right at the get go–Chuck’s hand jumped out of the gate like a heat-guided missile, aimed on bombing comfort and blessings onto Jamey’s arm. I think Chuck’s original intent was to hold Jamey’s hand, but Jamey’s ninja-like reflexes quickly kicked in, he folded his arms tight to his chest in high alert protection mode and all Chuck could get was an elbow. I think Chuck followed up the gesture with a soft-voiced, hushed, “So how you holding up?” This was the start of a befuddling, comical dance of a little game I like to call “Pastor-Hand-Twister-Tango.” Chuck would reach, Jamey would suspiciously retract, causing Chuck’s hand to land on random upper-body body parts. I think at one point, Chuck’s hand was resting on Jamey’s spleen. Satisfied with his mission to physically, spiritually and emotionally connect with Jamey, Chuck eventually left. He did, however, manage to bond with Caeley over Jimmy Fallon videos. When he left, I asked Jamey what he thought of Chuck. “I couldn’t understand why he kept touching me the whole time. I think he was hitting on me,” Jamey said, “Otherwise, he seemed nice.”