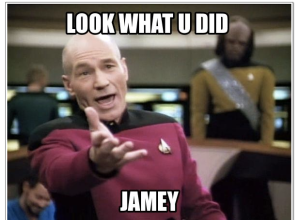 If he’s awake, there’s a pretty good chance he’s eating. Or watching The Price is Right(who among us isn’t guilty of that one.) Most of the time, I think he eats just because he forgets that he’d recently eaten. Sometimes I think it’s simply the tumor’s impact. Sometimes it’s just boredom(who among us isn’t guilty of that one.)

His anxiety’s been up a bit and he’s been pacing/wandering(thankfully only inside the house) a little more, so I finally broke down and started giving him his Ativan more regularly.

At first, I didn’t want him knowing what the drug was. He used to be very anti-medication and I was worried he’d refuse a sedative. I also started him off on a really small dose–.25 mg.

His body used to be very sensitive to drugs; whereas I’d have to down a bottle of morphine to get rid of a toothache, he’d take 1/4 pill and be knocked out cold. He must be really anxious because he now takes 1 mg and it barely takes the edge off.

I realized he’d adopted a more liberal attitude towards taking medications when he (jokingly, I think?) told our substitute nurse that he had “so much pain” that required morphine…..he said with a smile that on a scale of 1-10, his pain was a 20.

He then went on to suggest to her that perhaps he could start selling his morphine in order to make some extra cash.

Luckily, her “Spidey Sarcasm Senses” were tingling and she laughed it off.

In the interest of full disclosure(and for all my former drug-addicted friends), the morphine he has is in liquid form and such small doses that you wouldn’t make any money off it anyway.  And it won’t make you high either.

Honk if you get the above picture and reference to the “Ativan” comment. 🙂

Headed Into Overtime saw a big jump in followers, thanks, in part to the graduates of Lawrence High School who were close with Jamey.

Jamey was really excited to hear all of the names of people who reached out to him.  Thanks!

We also finished out our official first month with over 6000 page views from several different continents. As of today, these are the countries that we’ve reached:

Countries Headed Into Overtime has reached

Thanks to all of you and please, keep sharing! (Also, where the heck is Macedonia?!?!)

Caeley has officially been promoted from Lead photographer to Lead photovideographer. She’s thinking about starting her own section on the blog that she’d like to call “Caeley’s Corner.”

She’s not sure that she’s comfortable writing any of her reactions/feelings down, but she would like to start with some short video segments. Here’s a sneak peek….

Stay tuned to find out what that random “St. Elsewhere” reference meant.

In an odd turn of events it sounds like our hospice provider, Samaritan Hospice, is going to be opening a thrift store in Pitman, NJ. The building they’re supposed to be moving into is in the same building as Caeley’s therapist.

According to Dr. Perez-Rivera, Caeley’s therapist, Samaritan is more interested in gaining a presence in our county(Gloucester County) than they are making money off the thrift store.

Do any of you have any suggestions? Anything you’d like to see/hear more of/less of?

Please let me know how we’re doing in the comments section below!

As always, thanks for your support.