Yes—that’s me in the above picture. Don’t fret. I’m not quite dead yet.

Any beliefs you may have had about me being a woman of class or decorum are likely dead, however, after seeing me mimic a corpse in a hospice bed.

What can I say? Gallows humor has its appeal.

The original title of this blog was “Former Hospice Rejects“.

I picked it because, well, it applied–we had in fact failed our original hospice evaluation(I jokingly told Jamey that although he excelled at a lot in life, he sucked at dying).

I also thought it was a clever, thought-provoking title.

And I’m all about clever and thought-provoking.

In hindsight, I’m glad I changed the blog’s name to Headed Into Overtime. I like referring to you as HOTties(not FoHoRes) and the soccer/sports theme captured a significant part of Jamey’s life.

So yes,  we were turned down on our first go-around with hospice.

As you can imagine, that led to a swell of conflicting feelings: anger, hurt, embarrassment, disappointment, relief, confusion–all rolled into one.

I will detail the mind- numbingly emotional oncologist visit during which Dr. Desai, Jamey’s primary doctor,  strongly suggested hospice in a separate post.

For now, I’ll walk you through our hospice steps.

It’s been a year and a half since I started this blog. One of my goals for the blog was to demystify the often taboo term of hospice.

I’m going to do a series of pieces on hospice to highlight its different aspects.

Hospice Eligibility–How to Succeed at Dying Without Really Trying

Hospice services aren’t as easy to come by as you might think.

You could be the kid in the classroom who’s obnoxiously raising his hand the highest and screaming “PICK ME! PICK ME!” the loudest and you still wouldn’t stand a chance of getting referred for a hospice evaluation without first being referred by your primary physician.

And those primary physician recommendations aren’t arbitrary. Doctors need to offer a strongly compelling reason for a referral.

They can’t just refer you because you’re an annoying patient who they’re sick of dealing with.

Or because you’re a Philadelphia Eagles fan.

No, they need to be able to strongly justify a referral.

That justification usually boils down to this:

They need to be able to profess that in their professional opinion, you must have a terminal illness. That terminal illness is defined as having a prognosis of 6 months or less if the disease or illness runs its normal course.

Now here’s the thing–unlike milk and mascara, none of us has a suggested expiration date.

Even in the most aggressive and predictable forms of illnesses, there are exceptions to the rule; there are outliers.

So doctors often have to go with the patient’s presenting condition/symptoms and compare that with previous historical evidence of a particular disease’s progression when making a determination about the eligibility of services.

And beyond the professional opinions and wealth of current and background knowledge is the painfully delicate and deeply emotional piece to this whole equation.

The doctors need to sit down with the family of a dying patient(many of which, I’m assuming, don’t really want to admit the person is actually dying) and say to that family, in essence: “Ummmm….yeah….you’re probably going to be dead in 6 months. Exit, stage left.”

Ok, so I’m thinking no doctor has every presented the often heart-wrenching referral of a diagnosis in such a manner, but you can imagine that it would very likely be a difficult topic for a physician to approach.

From a “this is a totally awkward conversation that no one wants to have” standpoint, it’s probably much easier for both a doctor and a family to continue with the standard course of care for a very ill patient–(refill the prescriptions, make a follow-up in 1 month, monitor patient for significant changes, blah, blah, blah) than it is to accept the stark reality that no amount of colace in the world is going to cure metastasized colon cancer.

So the first step in one’s hospice journey is to have the support and referral of a personal physician who’s willing to not only make a professional judgement about your expected number of minutes left on this earth, but who also has the compassion and, let’s face it, courage to share that judgement call with you and your family.

You’ve received a referral to hospice.

Does that mean your home will soon be equipped with commode and Craftmatic adjustable bed?

It’s not only your primary physician who must “ok” your likely- 6 -month -or -less demise.

Whatever hospice facility you’re referred to (and yes, there are usually many in your area all competing for your “business”) also has their own in-house physician.

And ultimately, it is that physician’s nod of approval that will get you the services you need.

And the only thing that that in house doc has to work off regarding your case is the info he or she has received from your primary doctor as well as any relevant details that your hospice intake worker provides when he or she comes to your house to do an evaluation.

Here’s how that happens.

Your primary physician will pick a hospice to send your info to.

That facility will then reach out to you to set up a time and date for an intake.

Once a time is determined,  an intake/assessment worker comes to your home. In both of our two assessments(and my mom’s assessment), that intake worker was also a Registered Nurse. 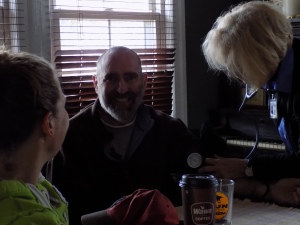 Blood Pressure: check. Jamey was reassured knowing that his heart was still beating.

Since hospice is a holistically-minded approach to care, the facility will also likely send out a social worker at intake.

That social worker will evaluate not only the patient, but the family system as well.

Hospice is centered around not only the needs of the patient, but the needs of the family as a whole. The social worker will address your socio-emotional needs, strengths and weaknesses and include that in your overall assessment.

They’ll be at your home(where most intakes occur, assuming the patient isn’t already in a medical facility) for a few hours. In both of Jamey’s evaluations, once the intake was over, the intake worker excused herself to make a call.

The first time she did, she came back with the suggestion that, based on her evaluation, Jamey’s prior history and medical records received from his primary doctor, that he was not yet eligible for services.

I didn’t quite get what had happened the first time around, but I believe that when she left the room to make a call, she was calling the hospice’s in house physician.

And, based on her 2 hour intake, the in house physician determined he was not yet eligible for services.

The second time he was evaluated, we had a different intake nurse(thankfully).

And my desire for hospice services the second time around came from a much more unnerved and, quite frankly, panicked place.

Although Jamey’s physical health had actually remained stable since the first evaluation, his mental state had not.

Although he was in a weakened state and shaky on his feet, he still had a lot of strength.

He was a scary combination–still strong, with poor impulse control, a simmering level of agitation and no insight into his behaviors or their consequences.

Cocky as I may be about my own physical prowess, I admit that his anger and aggression scared me a few times. Still, I felt if push came to shove(literally), I could handle myself in a physical altercation with him.

My main concern was for Caeley’s safety.

There were still times that, based on necessary circumstances such as my work schedule, Jamey and Caeley were alone in the house together.

And although both had strict instructions to “remain on separate floors” until I got home(yes, it had gotten that bad), the instructions were not always followed.

And there were fights between them–mainly verbal. But there were a few times when objects were thrown.

There was one incident where he hit her in the shoulder.

She took a picture of her bruise and texted me while I was in class.

By the time I rushed home, the bruise was gone so he must not have hit her with much force.

Something needed to be done.

So I called hospice again.

Armed with these new, more disturbing details, I shared my serious concerns with my new intake nurse.

She commiserated and stated that his behaviors were not transient–they would only get worse.

She accurately pinpointed his need for medications that would help him deal with his issues of wandering, poor sleep and agitation–she knew he, Caeley and I would benefit from a calmer Jamey.

So, after she and the social worker finished their 2 or so hour intake, she excused herself to make a phone call and came back a few minutes later with the news that we’d been accepted.

To this day, I have no idea what she said to compel her in-house physician of our need of services.

But whatever she said was convincing enough to allow Jamey to not only receive services, but to remain in the house with us.

Had we not received help, my next step was going to be to try to place him in a nursing home for the safety of all of us.

Luckily, it never reached that level.

Whatever she said was enough to get us into hospice.

And it was enough to get us access to the medications needed to keep him calm and stable.

And it was enough to be able to allow me to breathe a little easier when I had to leave the two of them alone.

Now…that was what happened on our own hospice journey.

If you’re clearly in an obvious state of decline(losing weight rapidly, bed-bound, sleeping more, “wasting away”, etc), it is probably a very easy, straight-forward acceptance process.

Once you’re “in”, you are assigned your own treatment team. 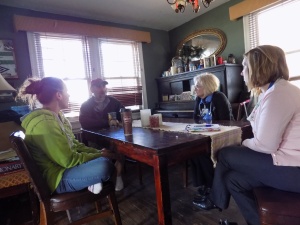 And you and your treatment team come up with a schedule of services that works for you.

That schedule can change at any time based, again, on your needs and wants.

I’d always been under the impression that once you entered into hospice, strangers would be traipsing in and out of your house at all hours of the day with needles and masks and alcohol-soaked cotton balls.

I kind of think of hospice like an extra credit question on a test:

It’s there if you need it, but if you’re ok doing it by yourself it’s not necessary.

Thankfully, hospice was eventually there when we needed.

So those are the basic steps required to get you into hospice.

In my next entry, I’m going to talk about how we can thank a British woman(i just can’t get away from these Brits, can I) for introducing modern hospice to the states as well as what differentiates the hospice approach from standard end-of-life care.

2 thoughts on “Hospice: Dying to Get In”