One of my first jobs was working at Dairy Queen.

In addition to what I believe you can call a paycheck, as an ever-starving teenager, I had access to something far more savory:  hip, gut and butt expanding frozen treats all day long.

I also became BFFs  with the pleasures of the “Non-Dog” which was comprised of a hot dog bun, spicy mustard and sauerkraut–but no actual dog….see below: 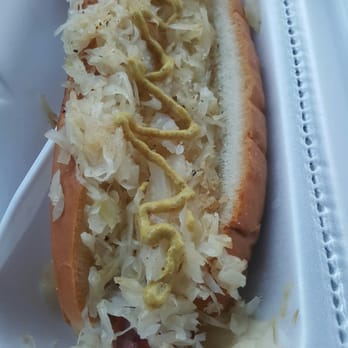 I  invented that meatless concoction on a three day stint with vegetarianism back in 1989.

It’s one of my many claims to fame(multiple watches on the same wrist being another one….but I digress…)

Not actually a picture of me, but close enough

If I had to pick a job duty I enjoyed most, however, while working at “DQ”, it would undoubtedly have been preparing Blizzards for customers.

The Blizzard was still a relatively new menu item when I started working at DQ.

For those of you in countries bereft of the frozen confectionary pleasures found at Dairy Queen, here’s a quick scoop(see what I did there ?)of how a Queen of the Dairy presents a Blizzard that will eventually work its way into your belly:

5. After removing from blender,  we make absolutely, positively sure to serve the Blizzard to you, the customer, upside-down–just like you see in the above picture.

6. You eat it. And are now privy to the meaning of life

I’ve gotta be honest–as both an ice cream and a chocolate candy junkie customer, I was delighted by the concept of the Blizzard.

As a creator of the creamed concoction, however, I was terrified!!!

I can’t tell you how many punctured Blizzard cups I had to throw out while learning the craft of the blend.

And I was always paranoid that I’d experience countless “upside down” presentation mishaps that resulted in counter and/or floor mop-ups and no sales to customers. 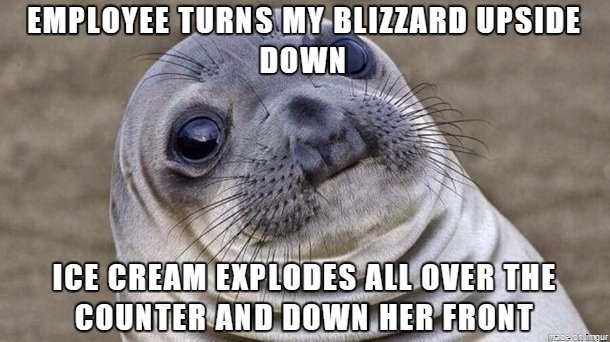 Alas..none of my fears ever came to fruition.

It didn’t take long for me to work out just the right combination of force on the cup, and adequate  wrist action to present to the customer;
“The Perfect Storm of Candy and Cream“

“So what the heck, you’re asking, does this  have to do with the blog post?”

“How can she equate blizzards with brain tumors?”

“What’s the link between hospice and Heath Bars?”

“Is there a causal connection between Dairy Queen and dying?!?!!?!?”

Well, rest assured, HOTties……this post is going somewhere—but not necessarily in the direction you may think.

And just like I spent time blending together Reese’s Peanut Butter Cups, Oreos and M-n-Ms in chocolate ice cream when making my own personal ideal Blizzard, 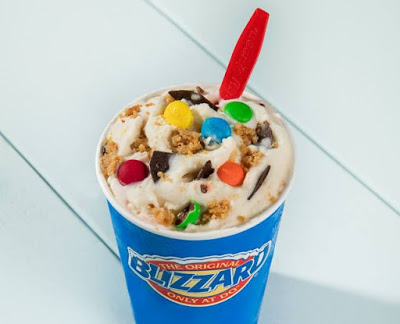 If this were chocolate ice cream, it would be ideal

We’ve been working towards blending our own respective families, that is.

It has been a slow blend, to be sure.

He and I have been in a relationship of sorts since late 2015.

It’s now early 2017…and our kids have just recently met.

Mind you, we have a shared house where every one of our kids has his/her own dedicated bedroom–you’d think this wouldn’t have taken nearly as long as it has. 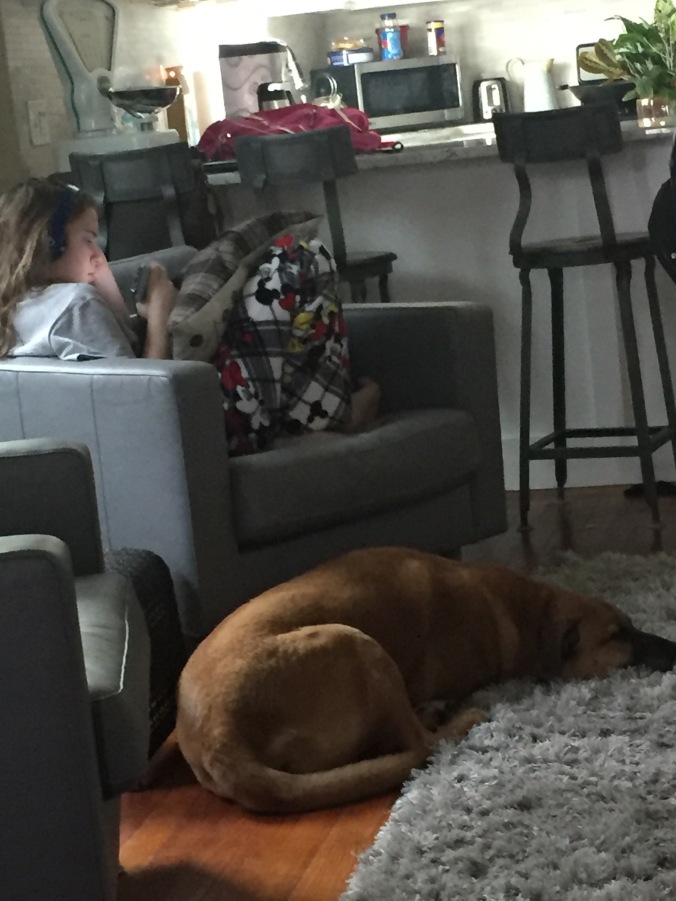 Cael and Tug, making themselves at home in their “other”home.

And it’s been mainly intentional.

All of our kids have gone through significant upheaval; all of them have experienced loss and change.

Granted, that loss and change has sprung from different sources, but it is emotionally challenging, nonetheless.

We wanted to reach a point in our relationship with each other and their shared relationships with us as a couple where we felt confident bringing us all together.

So we decided to do it on neutral territory.

No–not a heaping mound of ice cream(although that would’ve been delicious, albeit sticky).

Now let it be known, I am a sharp, skilled and adept skier: see below:

Yeah…I’m kind of a big deal.

Ok, so maybe I need to become a bit more slope proficient, but Robbie, Cael and the two of his sprogs who joined along can actually ski.

So here was our rationale for the commencement of blending into said one family which will heretofore be referred to as: McCarstoun.

(Oh, and because I’m not comfortable divulging any personal info about his children, I’m just going to refer to them by their first initials…

Or you can choose to believe that British people are really lazy child  namers who stop at the first letter; up to you.)

Now–back to the rationale for the ski trip:

1. All interested parties like skiing(ok, your beloved author is on the fence here)..but the rest of the clan does.

2. It allowed for time spent together without any real need for conversation(no awkward moments around a restaurant table forcing reluctant teens to make small talk).

3.  It gave us all time to be together, yet offered a great deal of freedom as to how much both families interacted with each other(we stayed in separate hotel rooms across the hall from one another–close enough that we could play our version of “ding-dong-dash”, yet separate,  so both families had a “home base”.

4. It offered Cael an opportunity to actually ski.

She started skiing a few years back when my neighbors started taking her on week long ski trips(shout out to Steve and Kelly!)

Jamey had been a really good skiier but was only able to take Cael skiing once. Since I’m not a skier, she no longer had anyone to take her.

Planning a trip with another adult allowed her to ski supervised.

5. It was neutral territory.  Although we’d all been to this particular resort before, there were no deep, close emotional ties for any of us.

There were a lot of other “neutral” places we were thinking about, but many of them seemed to have some memories hovering about for Cael, especially.

We wanted a clean (snowy) slate.

You never get a second chance to make a first impression(just ask anyone who shampoos with “Head and Shoulders!”)

And a bad first impression is difficult to overcome.

We wanted to create the perfect storm of circumstances for the kids so that they’d leave that weekend with a positive association/a good first impression.

If they had fun skiing(which we knew they would), they would have “fun” memories about the trip.

And if they had fun memories about the trip, they were more likely to view the interaction of their first meeting together in a positive light.

As you can see, there was a lot of thought and strategizing going into this trip. Robbie and I strategizing in front of a Christmas tree.

We even used my lack of ski skills to our advantage.

Since I really can’t ski, I spent most of the day shuffling around on the lower part of the bunny slopes with the 3 and 4 year olds(a few of which I knocked to the ground due to my woeful inability to “Pizza”–sorry kids). 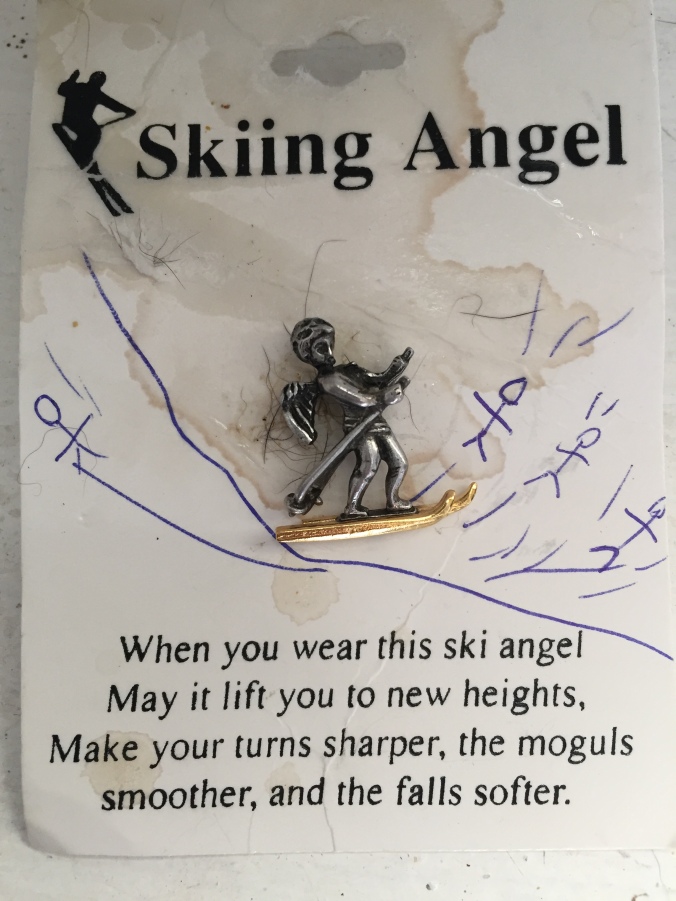 old daughter) started the day off on the bunny slopes with me patiently watching me repeatedly fall flat on my face.

After about a 1/2 hour of Robbie attempting, in vain, to teach me how to at least ski without plowing into toddlers, we all agreed that it was best to let me flail around on my own.

I gave Cael a choice–hang with me on the bunny slopes, or ski with Robbie and B.

She chose skiing over the shame and embarrassment of watching me.

She chose wisely–just like Robbie and I had planned she would(crafty folk that we are).

So she spent the majority of the day with Robbie and B(A, Robbie’s 15 year old son was off ski boarding with a friend).

Cael knew that at any point, she could come back and hang with me on the slopes….and that was an important “out” for her.

Although she had been excited in the weeks leading up to the trip, she admitted to being nervous about the logistics.

She’d mentioned to me before we left that she was worried it would be “two against one”–that Robbie would have B with him and Cael essentially felt like she’d be tagging along–an awkward and squeaky third wheel.

“B’s going to be skiing with her dad having fun and I’m not going to have any parent there”.

But that’s not the way it turned out at all.

In fact, Robbie suggested that Cael seemed very comfortable when the three of them were together.

She talked a lot, laughed a lot and would often sit next to him on the lifts.

In all, it tuned out to be a positive trip.

Or at least none of the kids came back with anything negative or terrible to say about the trip–and when you’re dealing with two moody teens and one on the cusp, we’re both taking the “no negative” as a positive

We haven’t had any McCarstoun outings since that trip but will be going skiing again on soon.

I’m hopeful(and of course, a bit nervous) that we will be able to pick up where we left off–that the few interactions that the girls had will begin to expand in time and depth.

On our next trip, A has mentioned that he may ski instead of snowboard.

On our first trip, we barely saw him.

If he does, indeed ski, that should make for an even more interesting ingredient to toss into the blend.

Well, I’ll be back on the bunny slopes, working on my pizzas and avoiding toddlers.

Here’s Robbie, B and Cael in action….

5 thoughts on “The Perfect Storm/Blizzard”