I have four clocks on the mantelpiece above my fireplace.

One tells the actual time.

One is set for 3 pm, the time of Jamey and my wedding.

The last was a clock that had previously been used to tell time.

That is, until the battery exploded inside it.

I liked the look of the clock(and I was going for symmetry on the mantlepiece arrangement) so I kept that defunct clock on the wall, frozen at the time it died–approx 2:40.

I can tell you this:

I received a delivery in the mail today–a peace lily from Jamey’s former co-workers at TD Bank.

Today marks the third anniversary of his passing and every year, without fail, his former co-workers send us something to mark the date.

As the years pass, fewer and fewer people remember.

That’s what happens as time passes.

So every year, the people that do remember–the texts, the emails, the thoughtful gestures, carry that much more significance.

After opening the peace lily this year, I was faced with a dilemma–where to place it.

My two cats are notorious plant-gobblers, so I had to choose a rare spot that they couldn’t access.

So I chose here: 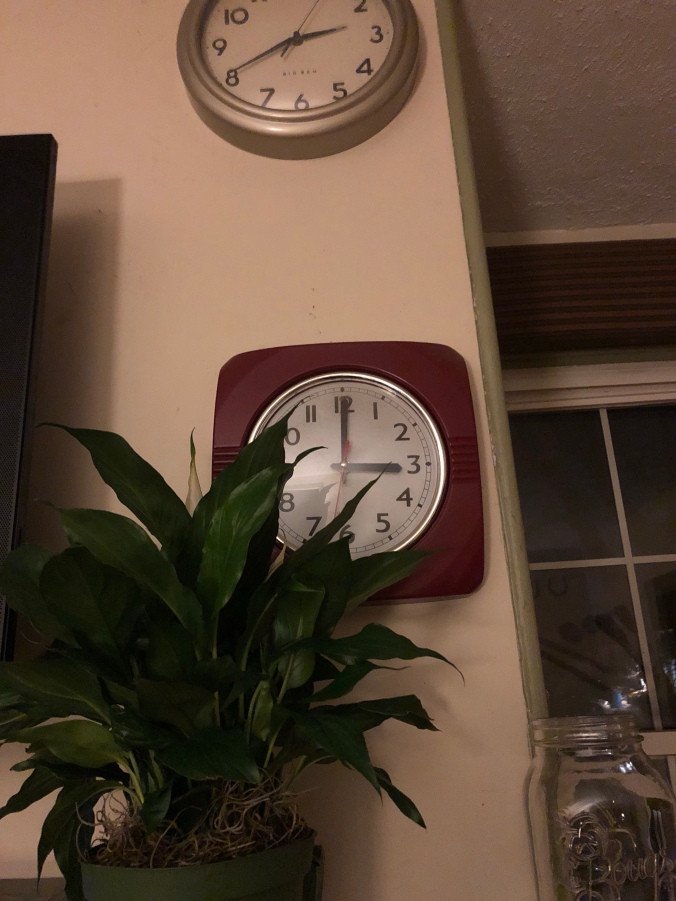 The plant now rests (hopefully) safely on my mantelpiece.

It’s slightly obscuring one of my clocks–the one that marks the hour Jamey and my wedding began.

It’s also directly below that now defunct 2:40-ish maybe am/maybe pm clock that I liked the looks of but really just kept up there for symmetry.

And oh, also, another thing to mention about that 2:40-ish clock that’s been retired to my mantelpiece for about 10 years now—-

It also marks the approximate time that Jamey passed away.

That’s a fact I didn’t realize until reading through all of my old Headed Into Overtime posts today.

It’s been three years and I’d never made that connection.

I’m not claiming “this is a sign” or “he’s speaking to me” or “this is a message from beyond the grave”.

I know people think that and I respect their beliefs.

And I hope they respect mine when I say I’m not a believer in such things.

It’s an odd coincidence; a happy accident to me.

Coincidence or sign, it made an otherwise pretty crappy day a lot better.

So on this thirdaversay of Jamey’s passing I’d like to share some lines of his favorite song by his favorite band.

I was listening to it a lot today and although it made me cry, it also brought me solace.

So, HOTties, my advice to you today is this:

Hang lots of different clocks in your house all set to different times. You’ll never know which one’s battery might stop at a significant moment in your life.

A Sort of Homecoming

“And your hear beats so slow

Through the rain and fallen snow

Across the fields of mourning

Lights in the distance.

For tonight at last

I am coming home.

I am coming home.”

10 thoughts on “A Sort of Homecoming”